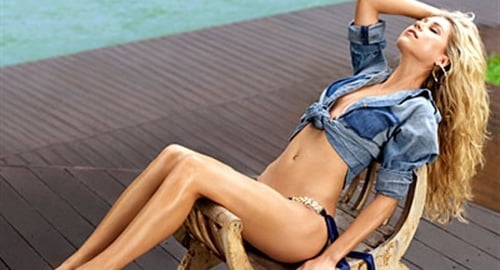 Godless Russian infidel Anna Kournikova, has reemerged into the public spotlight after years of hiding after her much hyped tennis career failed.

Now Anna Kournikova has collected herself and pulled herself up by her boot straps. She is ready to regain her lost fame the only way she knows how, by prostituting herself with these pictures in the new issue of Maxim magazine.

It never ceases to amaze me that the only way Western women know how to make a name for themselves is to sell their bodies. Anna Kournikova needs to learn that there are other much more respectable ways for a woman to become famous in this crazy modern world. For instance she could blow herself up on a public bus or spend her time birthing strong males for the Jihad.

Sadly women choose the easy way and become Zionist whores, as is evident by these pictures of Anna Kournikova in Maxim magazine. Be warned one of these pictures is in 3D. It is like the sin is coming right at you!